Rotten Tomatoes Rating: 45% (Critics) / 74% (Audience)
Directed By: Rupert Sanders
Written By: Evan Daugherty, John Lee Hancock and Hossein Amini
Starring: Kristen Stewart, Chris Hemsworth and Charlize Theron
Studio: Universal Pictures
Synopsis: In a twist to the fairy tale, the Huntsman ordered to take Snow White into the woods to be killed winds up becoming her protector and mentor in a quest to vanquish the Evil Queen.
(Source)

The Good:
Charlize Theron made some pretty interesting acting choices as The Evil Queen. She was unequivocally evil but Theron played her with a lot of subtext. Her Ravenna had a huge amount of sorrow underneath the malice and she was much more than just some bitchy megalomaniac with self esteem issues but a damaged soul who became the monster she was because of her past experiences.
Chris Hemsworth was good as the Huntsman and seems to have found a niche as the insufferable lout who finds a reason to be honorable (he had pretty much the same character arc in Thor) by the end of the film.
The effects on the black glass automatons The Evil Queen employs and the way the magic mirror was used were cool too.

The Bad:
As much as I liked what Theron did with her part, most of her scenes were just excuses for costume changes or opportunities for Theron to glower. But the weakest point of the film was Kristen Stewart as Snow White. The film constantly affirmed and reaffirmed all of the amazing attributes of the character (both physical and internal) but aside from the black hair and pale skin Stewart came up wanting. She was slightly less sullen and devoid of spirit than how she plays Bella in the Twilight films but she exhibited no qualities that would have led me to assume woodland creatures and towns people would be inspired by her.
The movie also seemed to be incapable of figuring out what type of film it wanted to be. It was not gritty enough to be a Grimm fairy tale and not fanciful enough to be of the Disney fairy tale variety. It just existed somewhere in the middle that made it hard to truly care about what was going on. 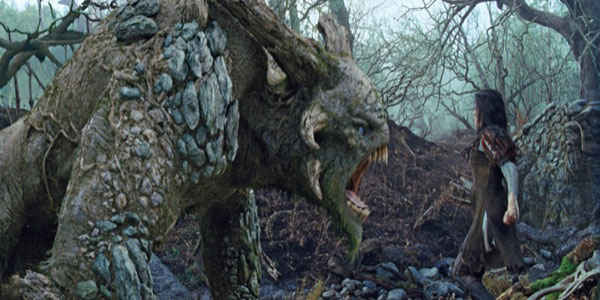 The Ugly:
They used normal sized actors shrunk down with special effects for the dwarves which has to have caused an uproar with little people rights organizations somewhere.

Final Verdict: Strong performances by Charlize Theron and Chris Hemsworth and nice special effects are not enough to make this cold and impersonal film rise above a weak performance by its female lead or overcome it’s inability to decide just what type of fantasy movie it wants to be. C-