Rotten Tomatoes Rating: 38% (Critics) / 40% (Audience)
Directed By: Eli Roth
Written By: Guillermo Amoedo and Eli Roth
Starring: Lorenza Izzo, Ariel Levy, Aaron Burns
Studio: High Top Releasing
Synopsis: A group of student activists travels to the Amazon to save the rain forest and soon discover that they are not alone, and that no good deed goes unpunished. – (Source)

The Good:
THE GREEN INFERNO is a beautiful looking movie with the camera capturing all the lushness of the dense Amazon jungle in sparkling detail.
There is also a very well executed plane crash that would stand up next to some of the best movie plane crashes I have ever seen.
I also can’t deny taking a wee bit of pleasure out of seeing a bunch of self-absorbed millennial Social Justice Warriors getting hoisted on their own petards as the indigenous tribe they sought to save (and exploit for Twitter fame) ended up eating them.

The Bad:
This movie had a seriously muddled message. One one hand Roth seemed determined to skewer today’s generation of social media slacktivists while on the other he was trying to push the whole “Save the Rainforest!” tree-hugger angle all while trying to also provide genuine horror. But what he ended up doing is making a movie about cannibals eating college kids that never truly delivered the shocks that is was painfully obvious Roth was confident he was creating.
And when given a chance to actually do something shockingly horrific he seemed to wuss out. I guess torturing, dismembering and eating people is OK but depicting female genital mutilation is just a step too far for even a seasoned shockmeister like Eli Roth. 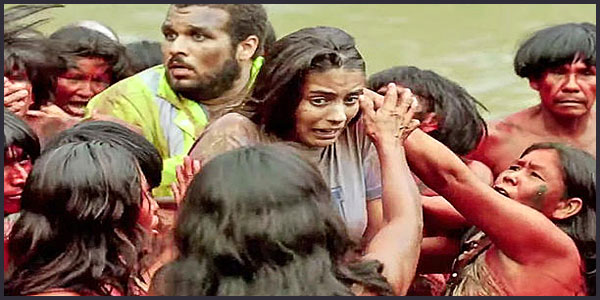 The Ugly:
Call me crazy but the one thing I never need to see in a horror movie is someone having a bout of explosive diarrhea while locked in a cage by a tribe of cannibals. That is just nasty.

Final Verdict: A movie that tries to be shocking but never really seems to deliver on that front despite how desperately it tries. It is still a really good looking film and does deliver lots of blood and gore for those who enjoy that but ultimately it was a bit of a disappointment to this reviewer.