The Good:
In what I quickly came to realize was a truly awful movie, the completely ridiculous acting performance of Keanu Reeves was a godsend. Reeves seemed to have gotten his wires crossed when accepting this gig and thought he was cast in a slapstick comedy instead of a horror/thriller so he came on set determined to play his role of a suburban family man who finds himself in a psychotic ménage à trois by channeling all of the most unintentionally funny performances that Nicholas Cage has given us over the years. At one point I closed my eyes and could have sworn that it was actually Cage in this disaster instead of Reeves. Jebus bless Keanu for being the one bright spot in an otherwise steaming pile of crap.

The Bad:
The fact that it took three people to scribble together this plot driven bunch of nonsense severely boggles my mind. Between the three of them they couldn’t have created one three-dimensional fully realized character?
And while Reeves was hilarious in his over-the-top bad acting performance, Lorenza Izzo and Ana de Armas were just truly and unironically awful in every way. The only thing they seemed to be good at were the sex scenes which may point to a bright future in the adult film industry for them both because they are not good at regular acting at all. 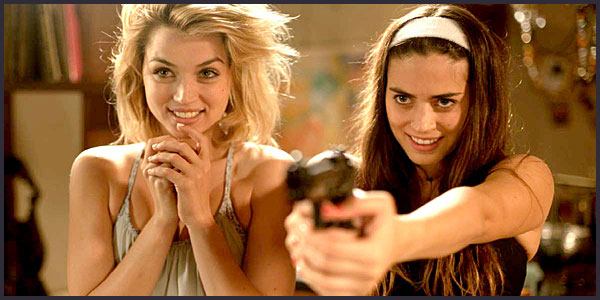 The Ugly:
Poor Aaron Burns needs to ask his buddy Eli Roth why he feels the need to keep casting him as the bumbling fat guy who dies in humiliating ways. Burns was the “Doomed Fat Guy” in THE GREEN INFERNO too.

Final Verdict: This movie is dreadful. Almost nothing works and if not for the wonderfully out of place acting performance of Keanu Reeves I might not have made it through the whole thing. It is getting to the point where I am beginning to question just whether Roth is capable of making a good movie anymore.