Rotten Tomatoes Rating: 36% (Critics) / 37% (Audience)
Directed By: Adam Wingard
Written By: Simon Barrett
Starring: James Allen McCune, Callie Hernandez, Corbin Reid
Studio: Vertigo Entertainment
Synopsis: After discovering a video showing what he believes to be his vanished sister Heather, James and a group of friends head to the forest believed to be inhabited by the Blair Witch. – (Source)

The Good:
The idea to use a drone camera was a neat one even if it was never used to anywhere approaching its full potential. I also thought the whole idea of time being screwy in the woods was something worth exploring with more detail which the movie sadly failed to do. 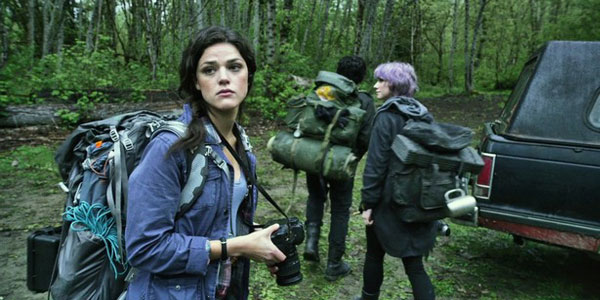 The Bad:
I can barely remember the characters in this film or even the order in which they died because none of them was memorable in the least. they were just a group of poorly constructed stereotypes with no rooting value at all.
But the worst thing about this movie is the fact that two storytellers I like, Adam Wingard and Simon Barrett, who have made some really cool movies (YOU’RE NEXT and THE VISITOR) produced this dreck. They seemed to bury all of their own talent in a failing bid to try and recreate THE BLAIR WITCH PROJECT. Their slavish devotion to that movie is really puzzling because THE BLAIR WITCH PROJECT was a terrible movie that is remembered more for its superb marketing plan than for anything about the movie. So these two truly inventive filmmakers sacrificed any originality they could have brought to this project and instead just regurgitated the awfulness of a 17 year old cinematic piece of crap.

The Ugly:
This movie may have killed any lingering affection I still hold for the “found footage” genre.

Final Verdict: If you are looking for an underwhelming rehash of the BLAIR WITCH PROJECT with prettier actors, better production values and 2016 video recording technology than BLAIR WITCH should be right up you alley. But if you would like to spare yourself 90 minutes of tedium than I would suggest avoiding this one altogether.