The Good:
I love horror movies that feature small children committing all manner of atrocities. So I was pleased to watch little Lulu Mason as possessed elementary schooler Doris just wreck havoc all over the place in this movie. Also the scares in this movie were well done enough to keep my interest in what is a pretty standard possession/evil spirit film. Sure all of the scares in OUIJA: ORIGIN OF EVIL have been done before but at least they were done well here which I credit Mike Flanagan (HUSH, OCULUS) for accomplishing. It shows that if you get a decent director to make these movies the odds of them being entertaining goes up exponentially.

The Bad:
Despite the best efforts of everyone involved, OUIJA: ORIGIN OF EVIL suffers from either a reluctance or inability to sustain any of the horror intensity for any amount of time. A scene would begin that would seem like it was heading to an awesome place but would inevitably end up being a bit of a let down as the intensity would wane and the climax would be more frustrating than I was hoping.
I also thought he ending was just horror movie connect the dots in its predictability. 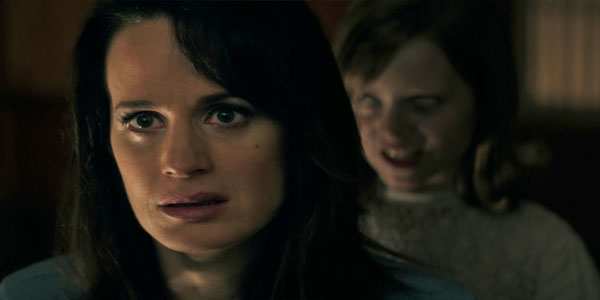 The Ugly:
This movie wasn’t awful but I can only imagine how much better it would have been if it were rated R like horror movies are supposed to be rated. Studios need to stop making these friggin’ movies PG-13…its an affront to the spirit of the horror genre.

Final Verdict: You can’t go wrong with a creepy little kid killing people and this movie delivers that in spades in what is a surprisingly improved film from the schlocky and predictable original OUIJA. OUIJA: ORIGIN OF EVIL doesn’t re-invent the wheel of horror but it does deliver enough frights to be well worth a watch.