Set to the backdrop of Awesome Mixtape #2, ‘Guardians of the Galaxy Vol. 2’ continues the team’s adventures as they unravel the mystery of Peter Quill’s true parentage. – (Source)

The Good:
The chemistry between the main cast is wonderful and the best thing about this movie. From the wisecracking and ball busting to the more emotional moments all were buoyed by the amazing chemistry that these actors have with one another and the way they flesh out the characters they play.
I also loved James Gunn’s deep dive into the more obscure corners of the Marvel Universe with characters like Ego the Living Planet, Mantis, The Sovereign, freaking Krugarr the Sorcerer Supreme of the 22nd Century and almost the entire membership of the old school Guardians of the Galaxy team that was created in 1969 (even though I never would have thought to cast Sylvester Stallone as Starhawk in a billion years); I am really hoping the reformed OG Guardians make a bigger impact in the next GOTG sequel.
And it goes without saying that Baby Groot was adorable and stole every scene he was in. 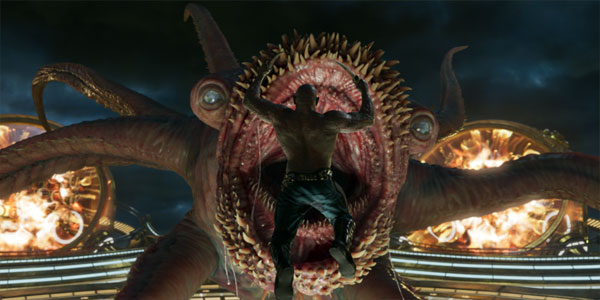 The Bad:
For the most part the plot was pretty aimless and not really worth paying much attention to.
This also continues the Marvel Cinematic Universe tradition of shitty villains. Not even Kurt Russell could get me to really give a damn about any of the paternal drama that was going on with Ego and Star-Lord. The Sovereign and their leader Ayesha were not all that impactful and the fact that the film portrayed the entire race as a joke didn’t help matters.
The movie was bright as hell too…I mean in a garish Joel Schumacher production of a Batman movie kinda way. Its like a giant clown puked cotton candy all over the movie.

The Ugly:
Five after-credits scenes seems like overkill to me. Especially when only 2 of them seemed all that meaningful in regards to the greater Marvel Movieverse.

Final Verdict: GUARDIANS OF THE GALAXY VOL. 2 is probably the most exuberantly fun movie that will be released this summer blockbuster season and revisiting this crew of old friends was a great time. However the movie itself was a tad bit incoherent with lackluster villains and a color palette that would be offensive to anyone over 6 years old.