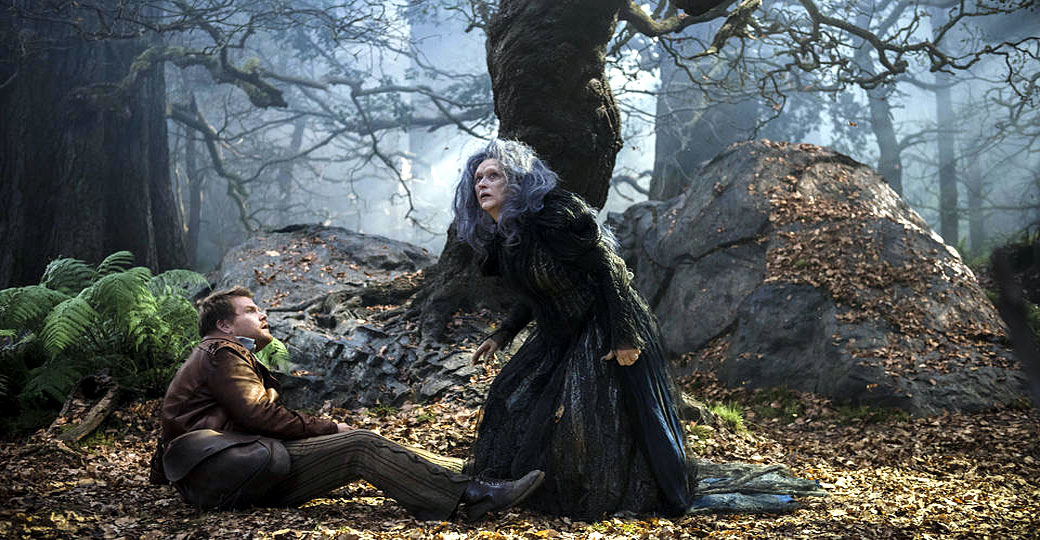 Rotten Tomatoes Rating: 71% (Critics) / 63% (Audience)
Directed By: Rob Marshall
Written By: James Lapine
Starring: Anna Kendrick, James Corden, Emily Blunt, Chris Pine and Meryl Streep
Studio: Walt Disney Pictures
Synopsis: “Into the Woods” is a modern twist on several of the beloved Brothers Grimm fairy tales, intertwining the plots of a few choice stories and exploring the consequences of the characters’ wishes and quests. This humorous and heartfelt musical follows the classic tales of Cinderella (Anna Kendrick), Little Red Riding Hood (Lilla Crawford), Jack and the Beanstalk (Daniel Huttlestone), and Rapunzel (MacKenzie Mauzy)-all tied together by an original story involving a baker and his wife (James Corden & Emily Blunt), their wish to begin a family and their interaction with the witch (Meryl Streep) who has put a curse on them. – (Source)

The Good:
The music doesn’t disappoint in this film and everyone involved gives their all in those “sing a song” moments. James Corden acquits himself well and Emily Blunt displays a very impressive set of pipes; Anna Kendrick shows she can handle show-tunes as well as pop songs and the kids cast as Jack and Red Riding Hood are really good.
I was surprised and impressed by Chris Pine though. he not only was hysterical as a not so-Charming Prince but he also displayed a great set of pipes in his big duet which was also one of my favorite performance pieces in the film.
Rob Marshall deserves kudos for how well he handled the translation from stage to film and did so by not working in the same style as he did in his previous film musical, CHICAGO.

The Bad:
It pains me to say it but my least favorite part of INTO THE WOODS was Meryl Streep as The Witch. That is the role that is supposed to be the scene stealer of all scene-stealers yet Streep never quite rises to the occasion despite her best efforts. This is especially evident in “The Last Midnight” scenes. That is supposed to be the showstopper basically and instead it came across as just another nice song in a nice musical. Why Bernadette Peters (who originated The Witch on Broadway) wasn’t tapped to reprise this role makes very little sense to me.
And I have no idea why Johnny Depp was hired as The Wolf or who made the decision to dress him up in a zoot suit but it was just bad decision making all around.

The Ugly:
In a bid to “Disney-fy” the musical there were some major liberties taken with the source material that basically took the teeth out of INTO THE WOODS.

Final Verdict: Most of the edge was removed in edits that would put high school productions to shame and Streep never fully embodied the role of The Witch but the music is still aces and everyone involved gave their all in terms of both singing and acting. In the end, INTO THE WOODS the movie musical doesn’t quite stand up to INTO THE WOODS the stage musical but taken on its own it is an enjoyable distraction for 2 or so hours.