The Good:
I was very impressed at how well-crafted the CGI animals were. The way the individual hairs moved and how their fur interacted with the wind and water was really cool. I also thought director Jon Favreau did a good job with the action set pieces. The battle with King Louie and his simian army was an especially well shot sequence.
The majority of the voice-acting was spot on too. I especially was impressed with Idris Elba as Shere Khan and Bill Murray as Baloo because those were the toughest acts to follow for people who are familiar with the original animated film from 1967 that featured the perfect voice-acting of George Sanders and Phil Harris (respectively) in those roles. 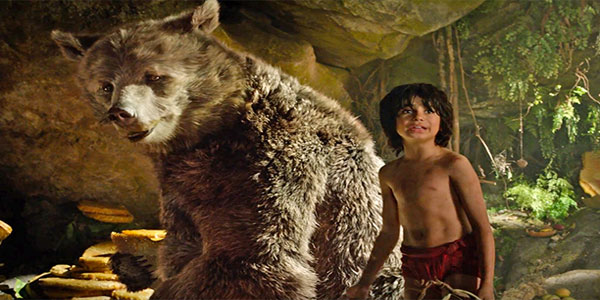 The Bad:
As for voice-acting that wasn’t quite up to snuff…Scarlett Johansson’s Kaa was really flat and in comparison to Sterling Holloway’s version it was just downright awful. But who really could compare to the voice of Winnie the Pooh in full on creeper mode anyway?

That’s good stuff right there.
The actual story that was the focus of this film was pretty thin and the kumbaya ending in this movie was even worse than the underwhelming ending from the Disney animated film.
And why was the choice made to use such a drab color palette for the jungle? Brighter and more brilliant colors would have been a much better visual than what we got.

The Ugly:
As much as I thought the CGI rendering of the animals was well done I did have issues with the way the different animals mouths moved when they talked. There was just something unsettling about seeing snakes and wolves mouthing words like humans.

Final Verdict: Nostalgia prevails again! A movie that I am almost positive I wouldn’t like nearly as much if I didn’t have such fond childhood memories of the animated film. With that being said I did enjoy most of the voice acting, the action sequences were well done, the CGI animals looked great and young Neel Sethi was a very charming live-action Mowgli.