Rotten Tomatoes Rating: 49% (Critics) / 61% (Audience)
Directed By: Ilya Naishuller
Written By: Ilya Naishuller
Starring: Sharlto Copley, Tim Roth, Haley Bennett
Studio: Bazelevs Production
Synopsis: A first-person action film from the POV of Henry, who’s resurrected from death with no memory. He must save his wife from a telekinetic warlord with a plan to bio-engineer soldiers. – (Source)

The Good:
Sharlto Copley was a total hoot playing a ton of different characters who all had the uncanny ability to recover from one violent death after another.

The Bad:
The movie is just a mess from start to finish as far as the story goes. The master plan by the bad guys to make all of these super-soldiers seem overly complex as well as not very efficient. The primary villain should have been a totally campy delight but was just awful. How exactly does an albino, Eurotrash telekinetic hipster end up being such a bore? That should be an impossible feat for anyone to achieve.
And this may be sacrilege to some but there are just so many hyper-kinetic shootouts and parkour death matches that one movie can sustain before it all just becomes tedious. 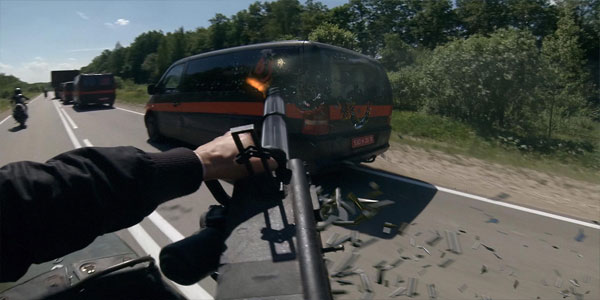 The Ugly:
The whole first person conceit was an awful idea. It gave me a horrendous case of motion sickness that completely ruined my entire day. I never wanted to walk out of a movie more than I did this one.

Final Verdict: If watching someone else play a first person shooter video game is your idea of a good time then HARDCORE HENRY will be the perfect movie for you otherwise stay far, far away from this craptastic movie that not even Sharlto Copley (working hard as heck by the way) could save.