The Good:
Roxanne Benjamin was successful with ‘Don’t Fall”, providing a visceral and pretty straight forward horror tale of demonic possession happening to a group of friends unlucky enough to go camping on cursed Native land.
The other successful segment was ‘Her Only Living Son’ from Karyn Kusama that was like a mix of THE OMEN and WE NEED TO TALK ABOUT KEVIN. It was deliberate in it’s pacing without dragging while also cramming in a lot of story in its limited running time.
I also enjoyed the creepy stop-motion animated framing sequences from Sofia Carrillo.

The Bad:
Jovanka Vuckovic’s ‘The Box’ was so slow moving and downright tedious that its nearly 15 minutes felt more like 90. And just because this is an anthology film with a limited amount of time dedicated to each segment doesn’t mean that you can be overly vague and sloppy in terms of storytelling and continuity.

The Ugly:
‘The Birthday Party’ wasn’t horror. It was barely even dark comedy. It looked like an alt-rock music video from the 1990s and it was pretty much just pointless. 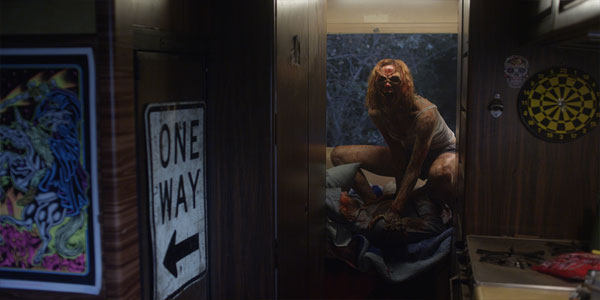 Final Verdict: Most anthologies are wildly uneven with the sum of its parts never equaling out to a successfully good movie and XX is no different. XX basically turned out to be a .500 hitter going 2 for 2 in terms of good vs bad segments.