When a mysterious woman seduces Dom into the world of terrorism and a betrayal of those closest to him, the crew face trials that will test them as never before. – (Source)

The Good:
New director F. Gary Gray makes a seamless replacement for prior directors Justin Lin and James Wan by providing just as many over the top chase scenes, lingering shots of cool cars, and just an almost non-stop kinetic energy in nearly every scene. The high speed land vehicles vs nuclear sub on a frozen tundra chase scene was one of the most ridiculous things I have ever seen on a movie screen but felt perfectly normal for a movie in this franchise.
Universal has a ready made spin-off franchise with Dwayne Johnson and Jason Statham. Any time these two guys were on screen having an ever increasingly funny game of “The Dozens” where they just insulted one another non-stop this movie was just great fun.
And though her scenes were brief, Helen Mirren was a delight as the tough, Cockney accented mother of Statham’s character. 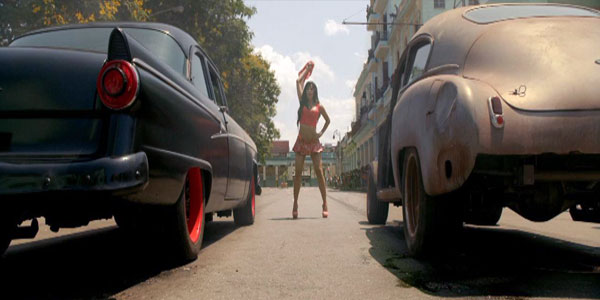 The Bad:
Considering how much money these movies make I am probably tilting at windmills but there is no reason for any of the Furious films to be longer than 90 minutes. These movies are always waaay too long and when a movie with constant explosions, fight scenes and car chases has periods where it begins to drag then maybe its time to go into the editing bay and make some cuts.
This movie also could have used more Kurt Russell. His Mr. Nobody steals all the scenes regardless of how many hulking brutes he is in the scene with.

The Ugly:
I get that Charlize Theron is a big star and signing her to play the villain of this movie was a major coup but I really did not like the character she played or the way she played her. The bizarre detached monotone thing she was doing as super hacker Cipher annoyed the hell out of me throughout the entire movie and considering how awesome she was as a hacker I never understood why she needed the band of rogue hair models on her cyber-terrorist squad or all of the outside help she kept acquiring. And the resolution of her character’s arc in this film was totally unsatisfying to me as a movie-goer.

Final Verdict: THE FATE OF THE FURIOUS is predictable as all hell but when predictability is basically what is being sold to audiences and the movie delivers then you can’t really complain. This film has all of the requisite car chases, explosions, one liners and fight scenes that audiences expect from this franchise and they are presented in fun and crowd pleasing ways. Could stand to shave off a good 45 minutes of its running time though.