Haunted by an unexplainable and unresolved trauma from her past and compounded by a string of eerie coincidences, Adelaide feels her paranoia elevate to high-alert as she grows increasingly certain that something bad is going to befall her family. After spending a tense beach day with their friends, the Tylers (Emmy winner Elisabeth Moss, Tim Heidecker, Cali Sheldon, Noelle Sheldon), Adelaide and her family return to their vacation home. When darkness falls, the Wilsons discover the silhouette of four figures holding hands as they stand in the driveway. Us pits an endearing American family against a terrifying and uncanny opponent: doppelgängers of themselves. – (Source)

The Good:
While every performer in this movie did a good job none of them compared to the tour de force performance by Lupita Nyong’o as both Adelaide and Red. While each character had a distinct look, that was just a small part of how Nyong’o made sure to differentiate the two. At times it seemed like two entirely different actors were playing the roles with how much Nyong’o would change the physicality of movement between them (especially in the confrontation scenes between Red and Adelaide where Adelaide was all wild desperation while Red was moving as if doing a choreographed dance) and the manner in which each character spoke. She did an amazing job. 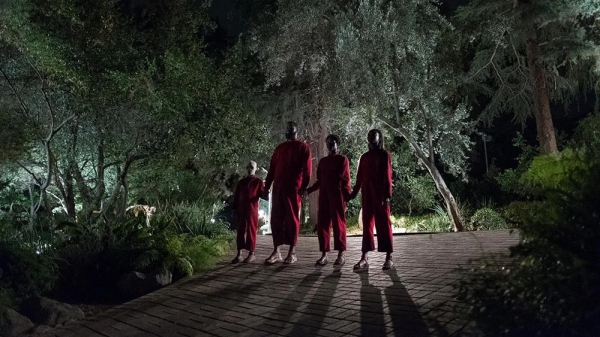 Jordan Peele also surprised me because with US he showed that he can do more visceral horror than what we got in the more cerebral GET OUT. The violence in US was as hardcore as one would expect from a horror film but Peele shot it with an abundance of style. And the visual calls to duopoly that are scattered throughout the movie could require a person to see US about 15 times in order to catch them all. US needs a second watch anyway just to catch all the things that make a lot more sense once the “Big Reveal” happens late in the movie.

I love The Tethered as movie monsters/villains primarily because of what they represented. On the one hand they are the forgotten people in this country. The homeless, the indigent the people who are always there but “regular” people have crafted an ability of the the years to basically phase them out. We have all walked past homeless people on the street and acted like there was not another human being in a horrible situation that close to us because it helps us move on with our lives if we can pretend that they don’t exist. With The Tethered, Jordan Peele has given those people form and a righteous anger and it was frightening to think about what would happen if those people all decided one day to replace the rest of us. How prepared are we to defend against people we actively go out of our way not to see? And as a person of a certain age I immediately made the connection between The Tethered, all linked hand-in-hand in a human chain, to the 1980 publicity event “Hands Across America” that was done to raise awareness and funding to fight hunger and homelessness.

But on the other hand The Tethered could also be a metaphor for Trump voters. The ones that a billion news stories have been written about since the 2016 election…the angry, supposedly voiceless people in America who feel that the so-called “American Dream” has been denied them and their response to this bit of anxiety was to burn it all down. Which is what The Tethered decided they would do once they found a charismatic leader who touched the dark and angry parts of them and who signaled a willingness to hurt the people that needed to be hurt.

The Bad:
The character of Gabe Wilson (Winston Duke) was odd and sometimes seemed to not fit in this movie at all. I understand if he was to be the comic relief for the movie but he seemed to be wisecracking constantly, especially in moments where making a funny joke was not something a father would do while in a life-or-death situation involving his entire family.

The actual origins of The Tethered was alluded to but never fully explained. They seemed to be scientific creations resulting from some sort of government experiments which really didn’t help to explain the supernatural elements around them. A little bit of a clearer idea of exactly what they were would have helped to bring everything into focus a bit more for me. 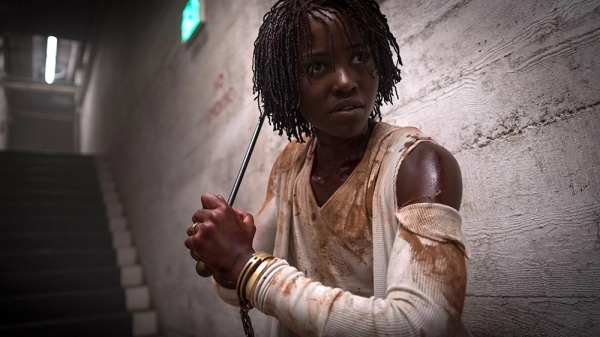 The Ugly:
I used to be such a big fan of “I Got 5 On It” by the LUNIZ but Peele and US has pretty much ruined it for me. 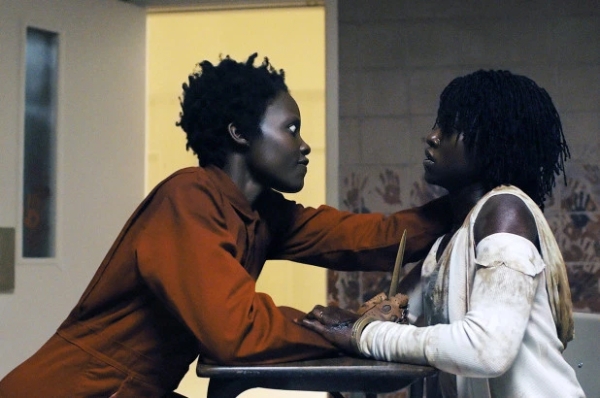 Final Verdict: A thought-provoking bit of political horror filmmaking that never cheats the viewer out of the thrills a good horror movie is supposed to deliver and make no mistake US is a good horror movie. And I am expecting Lupita Nyong’o to be a shoe-in for a Best Actress Oscar nomination.