When the world is under attack from terrifying creatures who hunt their human prey by sound, 16-year old Ally Andrews (Kiernan Shipka), who lost her hearing at 13, and her family seek refuge in a remote haven. – (Source)

The Good:
The design of the “Vesps” a diminutive hybrid of a pterodactyl and a bat (that reminded me of the creatures from PITCH BLACK in how they behaved) was not particularly scary but was very well done. They had the same creepily cute look to them that the critters in the CRITTERS movies have.

Despite being given hardly anything worthy of their talents, the primary cast all did well in their roles. I am maybe giving them more praise than necessary just because they were not assisted by anything in this movie but considering the circumstances Stanley Tucci, Kiernan Shipka, Miranda Otto, John Corbett and Kate Trotter all did good jobs.

The Bad:
This movie was a mix of overwhelming tedium that was broken up by moments of characters behaving like absolute morons and appearances by the cutesy little death bringers from the sky who swooped in to rip some poor sap to shreds.

The primary thing that irked me about THE SILENCE was how we were being beat over the head with the message that people needed to be as quiet as possible to avoid drawing the attention of the monsters while people continually carried on about their lives in the nosiest ways possible. Police cars where constantly sunning their sirens in the background like those things weren’t classified as noise makers. Then there was the scene of all the people so scared that they were trying to get out of the city (because cities are where all the noise is) who ended up in a traffic jam and immediately started leaning on their car horns like there were not baby dinosaurs listening for any sounds of a quick meal. And out hero, Ally (Shipka), who was deaf would constantly Facetime with her boyfriend with the volume on her tablet turned all the way up. 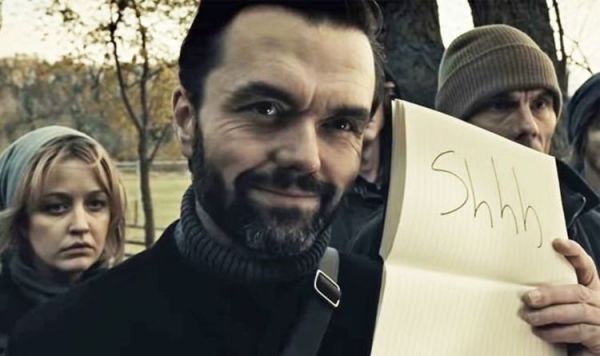 My second biggest issue was the inclusion of a cult that seemingly sprung up within the 2 weeks that this film covered and had already acquired a small membership who were cool with cutting off their own tongues and kidnapping fertile young girls to be used as brood mares by the cult’s skeevy looking leader.

The Ugly:
I know it is rough out there when it comes to getting roles as a woman of a certain age but I am personally offended for Kate Trotter that she was cast as Miranda Otto’s mother. There is barely 14 years difference in their ages and most of that isn’t even immediately visible when looking at the actresses. Trotter is a contemporary of Otto and Stanley Tucci…she’s not a whole generation ahead of them.

Final Verdict: A dull, lifeless movie that borrows heavily from much better films without ever even approaching the levels of entertainment value that those other movies provide.