Thank God It’s Wednesday!!! It is on Hump Day that all the geeks and nerds across the lands venture to their local comic book stores or whip out their tablets and get to downloading all the new books for the week. Wednesday is the high holy day of the work week for those of us that like funny books and since I am very fond of my own opinion on things it is also the day that I will do quickie reviews of a couple of the new releases. 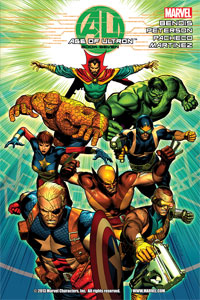 The miniseries that “WILL CHANGE THE MARVEL UNIVERSE FOREVER!!!!!” continues on. In the last issue Wolverine and Invisible Woman (Sue Richards) went back in time to kill Hank Pym before he could create Ultron which would hopefully stop the evil android from conquering the world. So back in the present Wolverine and Sue notice a few details out of place…namely that The Defenders have replaced the Avengers as the top super-team, Iron Man seems to have become the controlling force in the world, Captain America got a promotion to Colonel (yay Cap! It only took 60 years) and Cyclops lost and eye, has started calling himself Cable (wouldn’t only having one eye make his original name of Cyclops even more fitting?) and seems to be in a relationship with Jan Van Dyne who is now going by Ms Marvel. Of course the Defenders jump to conclusions and beat up Wolverine and Sue instead of trying to find out what the hell is going on but that is the norm for super-heroes.
Final Verdict: Writer Brian Michael Bendis continues to underwhelm with this event series and this issue felt like half of a book instead of a whole story. The art is also not helping things out at all. Carlos Pacheco and Brandon Peterson are sharing the art duties that Bryan Hitch had for the beginning of this series and they are really losing out in comparison to hitch’s work.
Grade: C

This new book by fan favorite writer Gail Simone has a pretty nifty premise…a bunch of upstart heroes take over a section of Coral City and using everyday technology like mobile devices and social media, wage a war against the corrupt establishment of the city. While this little bit of “Occupy DC Comics” is going on, a vicious super-powered serial killer is piling up bodies and collecting the victims eyeballs.
Final Verdict: Simone’s writing is aces like always and the brief glimpses of the members of The Movement has gotten me interested enough to want to know more about them. She also did a great job setting up the corrupt nature of Coral City where even the people we assume are good and honorable end up being a bit dickish. I am not really feeling Freddie Williams’ art though, I think a more dark and edgy artist would fit the tone of the book better.
Grade: B 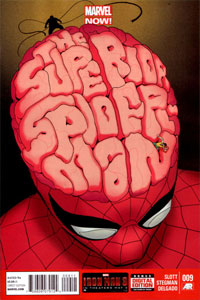 Just when the Spidey fans were starting to calm down over Peter Parker’s body being taken over by Dr. Octopus, series writer Dan Slott pulls the football away from them once again by eliminating what seemed to be the last thread of hope any Peter Parker/Spider-man fans had that good old Pete would evict Doc Ock from his body and return to his webswinging glory. I am not too bothered though since this is comics and no change ever really sticks plus Doc Ock as Spider-man has been a friggin’ riot to read.
Final Verdict: Now that it looks like Doc Ock is going to be sticking around for a while I am a happy camper…this issue solidified Doc Ock/Spidey as the current status quo and the mindscape battle between peter and Ock was pretty cool. Hopefully this allows for Slott to show Ock/Spidey progressively ebcome more heoric )but still retain his edge) without the caveat of Peter Parker serving as his Ock’s own personal Jiminy cricket.
Grade: B 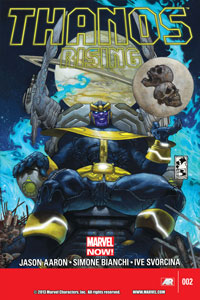 Jason Aaron continues to pull the veil back on Thanos and make what is supposed to be a majorly awesome baddie into someone so common. The gist of Thanos’ origin story (according to Aaron) is that Thanos was a simping, whimpering, needy purple Norman Bates with a genius IQ. Having the greatest villain in the entire marvel Universe revealed to be a garden variety serial killer who had no game with the ladies is kinda disappointing and I bet it has Darkseid sitting in his easy chair in Apokalips laughing his ass off as what an uninspired origin Thanos has.
Final Verdict: This books should not exist because all it is doing is taking away the mystique of the Thanos character and creating a backstory that makes the guy drop several rungs on the coolness ladder. That being said the art by Simone Bianchi is beautiful.
Grade: C- 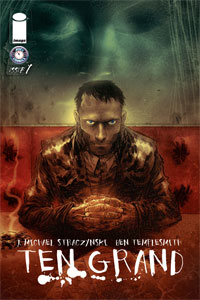 Venerable TV writer J. Michael Straczynski returns to original/creator owned comics with this tale of an “enforcer” for hire in a world of angels and demons. Joe Fitzgerald is the guy that you go to when you have a problem that needs fixing and for a cool $10000, Joe will remove your problem…for good. That is unless your problem is like James, a demon Joe thought he killed years ago who is back for reasons Joe doesn’t know yet but he had better find out before James kills him…again.
Final Verdict: The premise for this comic is very cool and JMS writes some pretty nice “hard-boiled detective” dialogue. He also does a good job of introducing the mythology of the world he has created with its angels, demons and necromancers. Brian Templesmith’s art is the perfect companion to the writing and delivers the perfect mood for this horror/crime story.
Grade: B+