The Good:
There were some really fun and entertaining acting performances in this movie. Most notably from Lily James as the feistiest of the Bennett girls and former DOCTOR WHO star Matt Smith as a delightfully foppish man of the cloth.
I also liked the spin that was put on zombie behavior and methodology. I am always up for new takes on well worn monster movie tropes.

The Bad:
For a movie that is a mash-up of a classic piece of literature and a gorefest zombie horror movie, I was expecting things to be just a tad bit more kooky than what was delivered. And the romantic scenarios were so vapid and undercooked that they would have been better suited for a teen soap opera.
I also was not amused with how sorely underused Lena Headey was as a woman who we were told was the best swordsperson in the land but we never actually got to see her prove it in the flesh. 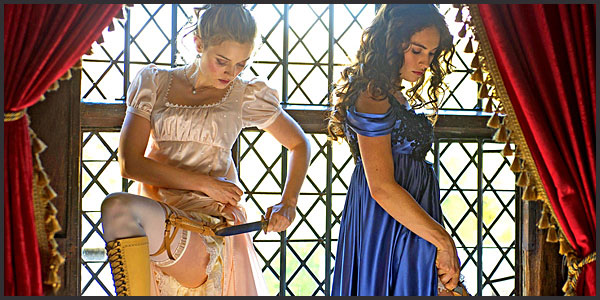 The Ugly:
The overuse of CGI to depict zombiefied flesh and gooey, gory blood was just a travesty.

Final Verdict: Instead of being the over the top and outrageous roller coaster ride one would expect from this subject matter, PRIDE AND PREJUDICE AND ZOMBIES was just far too staid of an affair. Maybe a little more silliness would have helped it reach the full potential of its premise instead of being a couple of fun scenes and performances inserted into an overall lackluster movie.