The Good:
This cast is great and they all seemed to throw themselves into their roles with serious gusto. As someone who is not a Will Smith fan, I was impressed with his portrayal of Deadshot (even if it wasn’t the character from the comics) and his conflict between his bad guy inclinations and his love of his daughter; Margot Robbie was a manic delight as Harley Quinn and I can’t wait till she gets her inevitable solo film; Jay Hernandez brought a lot of soul to the role of El Diablo and Jared Leto’s original take on The Joker has me intrigued enough that I really want to see what a full length Batman movie with Leto’s Joker as the villain would look like. His playing the character as more of a sadistic loony crime lord hearkens back to earlier comic book versions of The Joker and I am interested in seeing more of that.
Of course the standout of the film was Viola Davis as Amanda Waller. Even in the face of immortal witches, costumed maniacs and met-humans there was no one more intimidating in this movie than Waller. And Davis imbued all of the hard-nosed ruthlessness that the character calls for. I also loved her mid-credits scene with Ben Affleck’s Bruce Wayne that was a set-up for the upcoming Justice League movie.
I liked the energy that flowed through David Ayer’s direction and the movie made all of the grungy darkness look pretty darn good. As controversial as his design ideas for these characters may have been, they all fit and looked great on screen. The transformation effect and the overall look of the Enchantress character were especially cool.
And the cameos from Batman and one other Justice League member were really fun. 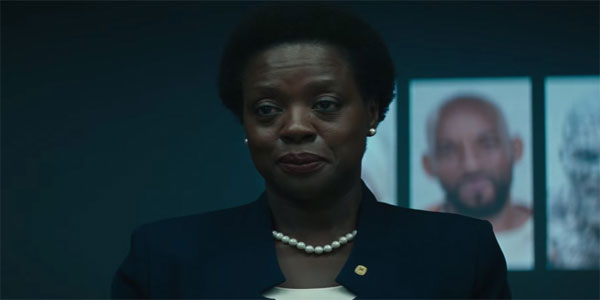 The Bad:
There were several lines in this movie that were so corny they made me groan audibly. Also Jai Courtney as Captain Boomerang was a pretty funny character who seemed to have all of his scenes left on the cutting room floor.
The romance between Rick Flagg and Enchantress was a bit of a mess too and for a movie called SUICIDE SQUAD there was not nearly as many dead team members as I was expecting. Also a good 30 minutes could have been lopped off of this movie and it wouldn’t have suffered at all. And the overuse of music was really distracting at times.
And there were some points in this movie where it looks like it was edited with a weed-wacker.

The Ugly:
The villain(s) in this movie were really lame. It’s a shame too, especially in the case of The Enchantress because there was a great story from the Suicide Squad comics that depicted her turning on the team that gave her better motivation and a much more interesting plan than just copying the bad guys plan in every GHOSTBUSTERS movie.

Final Verdict: A bombastic and in your face action movie that effectively peels back another layer of the DC Comics movie universe. The cast is great and the performances all range from good to awesome (with one hugely glaring exception). Some of the lines the characters utter are a mess and the villains are underwhelming as all heck but ultimately SUICIDE SQUAD is enjoyable in a big dumb and loud popcorn movie kinda way. Its like a FAST & FURIOUS movie with comic book characters.