The Good:
Paul Greengrass can probably shoot these Bourne movies in his sleep and they would still come out looking magnificent and better than 80% of the movies that get released every year. His shooting style for action scenes has been aped a million times over the years but no one does it better than Paul.
It is also nice to have Matt Damon back in the lead of a Bourne film after the misstep of THE BOURNE LEGACY where someone had the bad idea of trying to slot Jeremy Renner into Damon’s place.

The Bad:
There were points in this movie where I swore scenes from previous Bourne films had just be re-shot frame for frame. That is how recycled this movie felt. I get sticking with a formula but this many movie in really seems like a good time to switch things up a bit instead of sticking with what we have seen before multiple times.
And no matter how many quick cuts you use or dramatic music is played over them, people sitting at a computer clicking indiscriminately on keyboards is never ever interesting. 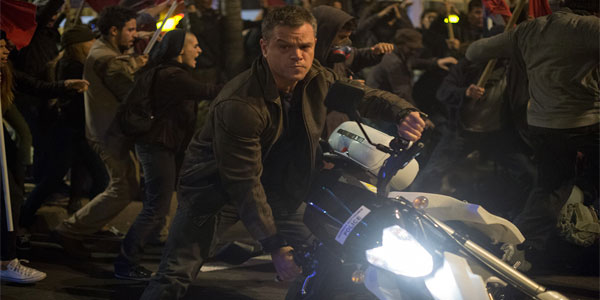 Final Verdict: Very well shot by Paul Greengrass but completely formulaic, JASON BOURNE does nothing new with the franchise and instead goes on auto-pilot giving viewers the same old same old.