Fueled by his restored faith in humanity and inspired by Superman’s selfless act, Bruce Wayne enlists the help of his newfound ally, Diana Prince, to face an even greater enemy. – (Source)

The Good:
I loved the chemistry of the members of the JUSTICE LEAGUE. Despite most of them having never been on-screeen together before, they immediately were able to fit into their roles and click with one another. That is a credit to the actors and to the script that made sure to keep things light and give each team member moments to shine as individuals as well as part of the team. Jason Momoa and Ezra Miller were especially notable as Aquaman and The Flash respectively. Miller’s take on the Scarlet Speedster is pretty unique but almost perfect while Momoa playing Aquaman as total “dude” was cool and I can’t wait to see both actors let loose in their solo films. Gal Gadot and Ben Affleck kept everything together as Wonder Woman and Batman. Gadot displayed the warmth and Earth Mother vibe that Wonder Woman usually displays when involved with the Justice League and Affleck’s Batman is the best big screen Batman ever (fight me!). I was expecting Ray Fisher to be the weak link as Cyborg but after a rocky start he hit a groove and made the part his own. Even Henry Cavill was allowed to show more personality in this movie than he was able to do in his previous two stints as Superman. 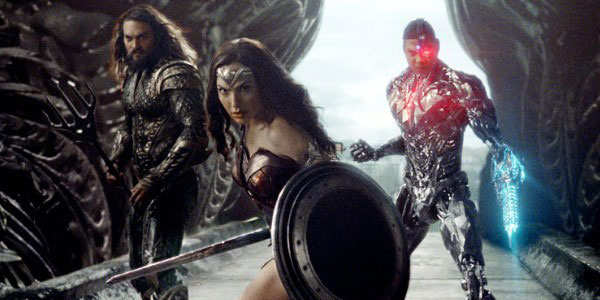 JUSTICE LEAGUE provides some really cool Easter Eggs for fans of the source material and the two after-credits scenes are like candy for longtime fans of these characters in print or TV form.
I also loved the fact that these characters looked like super-heroes. This is a comic book movie so I want people to look like they jumped out of a comic book. Keep your sensible jackets and cargo pants, please. Give me spandex and fancy Atlantean long-johns, people!
Also for a movie that was very evidently shot mostly in a green screen surrounded studio, everything looked really cool. From the frozen locales of Aquaman’s fishing village to the Amazon homeland of Themyscira the set pieces were very well done.
And I finally got to watch the Justice League have a live-action version of the prerequisite “super-hero misunderstanding fight” and it lived up to all the hype my nerdy brain could ever think up.

The Bad:
I love Ciaran Hinds as an actor and his voice alone lent a ton of menacing gravitas to the full CGI character of Steppenwolf but ultimately the character never really came together as the Big Bad I was hoping he would be. Actually the entire villainous plot was a bit of a borefest. Steppenwolf wanted to find the otherworldly Mother Boxes so he could put them together and then terraform Earth into a more Apokolips style environment. It was basically a mash-up of the villainous plots from THE AVENGERS (with the Parademons filling in for the Chitauri hordes) and MAN OF STEEL where the Kryptonians wanted to turn Earth into a new Krypton. All in all not that interesting.

The Ugly:
The WB mandated 2 hour run time seemed to be a bit constrictive and maybe if given another 30 minutes there would have been a chance for the plot to breathe a bit instead of everything moving at a breakneck pace because there was so much that needed to be crammed into that time limit.

Final Verdict: Fun is not a word that has been tossed around all that much when talking about WB/DC films but man, JUSTICE LEAGUE was a legit fun ride. The characters all meshed well, the humor was actually humorous and the action looked like the comic book page come to life. Sure it stumbles with a weak villain (which seems to be a problem with almost every super-hero movie) and its running time needed to be expanded a bit but overall JUSTICE LEAGUE was an entertaining time at the theater.