While babysitting the daughter of Ed and Lorraine Warren, a teenager and her friend unknowingly awaken an evil spirit trapped in a doll. – (Source)

The Good:
Mckenna Grace, as Judy Warren, is the anchor of this movie. For such a young actress she has a lot of screen presence and she was able to carry most of the emotional beats in this film opposite older actors. Grace also proved in this outing that she is more than capable of being the head of her own SCOOBY-DOO style spin-off movies if James Wan and the folks at New Line Cinema decide to make a solid go at the PG horror fan market.

All of the younger actors do a good job in this movie as it quickly takes a turn from a Ed and Lorraine Warren movie to a semi-standard teenagers in peril horror movie. What could have become predictable and uninspiring is instead very watchable and entertaining because all of the actors rise to the occasion and make their characters worth rooting for against all of the spooky shenanigans they end up facing.

Writer/director Gary Dauberman showed a decent amount of range with this movie, as he was the writer behind the earlier ANABELLE movies that were far more “adult scary” than this one. That isn’t too say that he skimps on the scary here because Dauberman manages to put together quite a few creepy scenes that will be guaranteed to make you jump out of your seat or feel very uneasy. 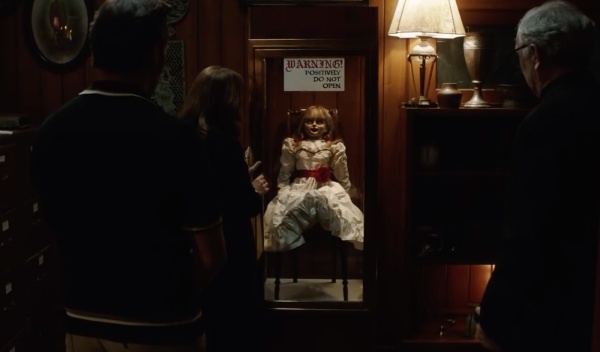 A standout among those great scary moments is the scenes of Katie Sarife‘s Daniella interacting with a haunted TV that shows her things that will happen to her a few seconds before they occur. The tension that those scenes create as Daniella and the audience watches and waits to see if what we saw onscreen happens to her in the Warren’s artifact room is top notch.

The Bad:
THE CONJURING Universe tends to offer varying degrees of scary so I usually come into these movies expecting frights on a sliding scale however, the ANNABELLE corner of this universe has gotten me used to a more visceral and grisly viewing experience with a nice sized body count. So I was a tiny bit disappointed that this third installment took such a sanitized “made-for-TV” turn.

The Ugly:
Could have stood to have shown a bit more of Ed and Lorraine than what we got as the two characters were mostly just bookends to their daughter’s story in this movie.

Final Verdict: A more tween friendly “GOOSEBUMPS” style outing from this frightening movie universe that is extremely entertaining without being quite as chilling and that opens up a veritable Pandora’s Box of spinoffs to add to the ever-growing THE CONJURING franchise.