Thank God It’s Wednesday!!! This week we have an indie dog story, an alternate universe World War 2 tale, The ending of the last big X-FACTOR storyline, Vibe gets a visit from The Dark Knight and some new nuggets of info about Tony Stark’s beginnings are revealed.

Tony Stark is still gallivanting around in space and he is currently in the clutches of the planet destroying Recorder 451! Yeah that doesn’t sound nearly as ominous as it should, does it? Suffice it to say, 451 has decided to reveal to Tony just why he is so interested in Mr. Stark and the big reveal is that when Tony was still gestating in his mamma’s belly there was something seriously wrong with him and in an effort to save his unborn child’s life, Howard Stark got involved with some alien Las Vegas casino owning gangsters to “rescue” 451 and use his knowledge of damn near everything to save Fetus Tony’s life.
To this end Howard Stark put together an OCEAN’S ELEVEN style team to pull of this caper and the crew he assembles (which includes AGENTS OF ATLAS leader Jimmy Woo, Dum Dum Dugan and Thunderbolt Ross) as well as the heist itself are the best parts apart this book. But that is not all, folks! There is also a bit of foreshadowing that Tony’s origins may be even more fantastical than being a super-genius with his own wardrobe of super-powered armor.
Final Verdict: If ever there was an origin story that did not need to be expanded on it is Tony Stark’s. Billionaire playboy industrialist inventive genius with his own super suits is pretty damn awesome enough. Throwing in alien civilizations and whatnot just seems like overkill where it was not necessary. However, my misgivings about the direction this story is going in did not hinder my enjoyment of this comic thanks to the old school caper hijinks and the fact that Dale Eaglesham has come on the book to save us from having to look at (previous artist) Greg Land’s stiffly posed magazine figures with their perpetual orgasm faces.
Grade: B

The least respected comic book character of the last 30 years continues to chug along in his own book with writer Geoff Johns doing his damnedest to make Vibe a likable figure. In this issue Vibe is called upon to hunt down the NEW 52 version of Gypsy who Amanda Waller want brought back to ARGUS by any means necessary. Vibe is beginning to see through the public face of ARGUS and is realizing that he is working for a pretty nasty group.
This issue also features the prerequisite guest appearance of Batman which I figure is an attempt to boost sales on this book. We also fins out that the NEW 52 version of Dale Gunn is an out and proud, married homosexual which is a far cry from the Shaft-like “sex machine to all the chicks” from the old DCU who had Vixen and Zatanna throwing themselves at him constantly.
Final Verdict: I like what Geoff Johns and Andrew Kreisberg are looking to do with this book in its concept and as far as adding diversity to the DC line of comus but there just seems to be something lacking in this series so far. Maybe it is the fact that we haven’t really seen Vibe being Cisco Ramone as much as I would like. Aside from his brother we don’t really know much about Cisco and his life outside of being a neophyte super-hero. And the art by Manuel Garcia and Fabiano Neves is not lighting the world on fire either. Refocusing the book a little more on the alter-ego of Vibe and bringing on a fan-favorite artist would be enough to do the unthinkable and make a Vibe comic into an actual success.
Grade: C+

The tale of a boy and his dog…and Joe, the grown ass man who comes along and steals the boy’s dog. This is an odd book. A salesman on a business trip comes across a stray dog outside of his hotel and becomes instantly obsessed with the pooch to the point that he blows off his work assignments and plots to dognap the critter.
Final Verdict: Like I said, this is an odd book but for some reason I am totally engrossed with Joe and really want to know what his deal is because he seems to be a couple issues way from going on a murder spree just based on the one issue of KINSKI that I have read.
Grade: B

Peter David’s really long run on this book is coming to a close and this issue ended his final big storyline “Hell On Earth” and it was quite a doozy. Madrox is still a demon, Monet is still dead, Guido is still soulless and the rest of the team (led by Polaris of all people) are storming Mephisto’s palace to try and get Rahne’s tweenage son close enough to kill the new Lord of All Hells. Lot’s of twists and action in this one with a really surpassing move by one character that I did not see coming and by the end of the book there is a brand new ruler in Hell.
Final Verdict: PAD continues to be the most consistently good writer in either major comic company and it is a shame that he is leaving this book that has such a distinct flavor to it that separates it from the rest of the X-line of books. Hopefully he gives these characters the ending they deserve and then he gets assigned a new book immediately.
Grade: B+ 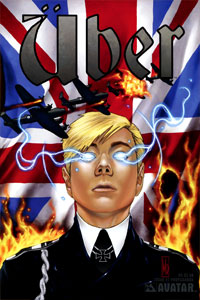 This book, written by Kieron Gillen with art by Caanan White, posits a world where just as the Third Reich was about to lose World War II (and Hitler was ready to off himself), the Nazi scientists unleashed 3 Ubermensch upon the Allied forces and turned the tide of the war. And these Nazi Supermen (or Superman since we are only shown one of them in this issue) are quite the awful creations as evidenced by a truly heinous act of mass murder that one of them engages in. Luckily for the Allied forces there was a spy in the midst of the Nazi scientists and she has absconded with all the info the Allies will need to create their own super-humans. Of course she has to make it out of Nazi occupied areas of Europe first and since she is the most wanted woman in the world and Hitler has a couple super-humans on his payroll, I am not too confident in her chances.
Final Verdict: A great start to a book that holds a lot of promise. Gillen’s writing is very tight and he does an amazing job painting the Nazis as a diverse group with some of them being just as bats hit crazy/evil as you’d expect but with others not quite as enamored with the idea of a lunatic like Hitler having control of super-powered human beings. The art gets a bit messy at times but overall White does a bang-up job with this book and creates some really cool violent imagery.
Grade: B+