Carl’s dead and Rick and Michonne are still reeling but Rick decides to push his grief aside and focus on the mission at hand: namely continuing his war against Negan. The trash People have to face the music. Maggie sends Negan a present. We find out what happened with Enid and Aaron at Oceanside. And Simon chews all the scenery.

Title Cards Are What I Call High Art

So this episode was all about a new gimmick of title cards with specific characters names on them. It’s like a Quentin Tarantino movie, people! That is the high quality auteurship that ya don’t get any place but THE WALKING DEAD.
But really it was just the latest gimmick by this show to try and make things more highbrow than things really are and because the folks at TWD are never tired of showing how pretentious they are we get titles cards to frame this first post-Carl episode. I really wouldn’t be all that bothered by this if it actually showed up in the show. Sadly, the title card pops up and we then get scenes that don’t really focus on the character whose name is in the title card. Michonne’s little vignette was pretty evenly split between her and Rick with Michonne’s point of view really not being the dominant one at all. Same for all the other sections except for the one with Jadis.

M is for Michonne 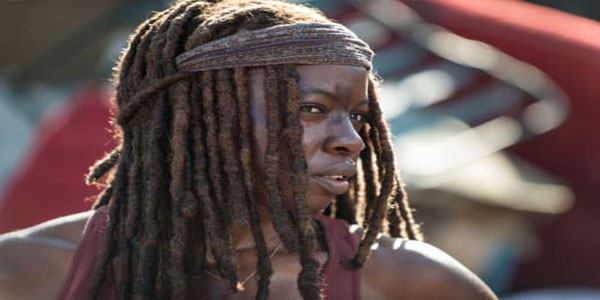 Michonne’s segment was a bit bewildering. It started off well enough with Michonne still reeling from Carl’s death and she and Rick packing up a van to leave the remains of Alexandria. But Alexandria, which looked like a bombed neighborhood in Yemen last episode, was not nearly as ruined in the daylight. Heck, Rick and Michonne’s house was completely untouched. There wasn’t even a broken window. Maybe they plan on re-purposing those sets so a few of them needed to stay intact. I do think a little bit more damage would have been nice since last episode made it seem like Te Saviors were doing some Bush style “shock and awe” for hours. 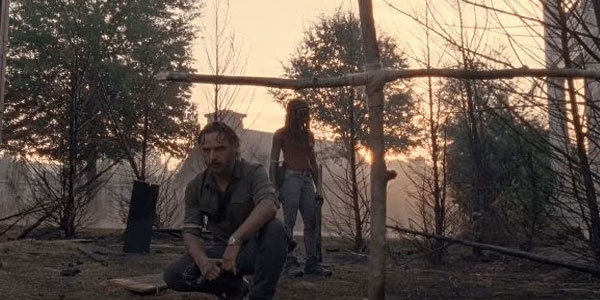 My biggest issue with the Michonne segment though was when Michonne decided that saving a burning gazebo was worth risking her and Rick’s life. Why would Michonne take such a huge risk over some random gazebo? Well that gazebo was not random. Nope, that gazebo was the gazebo that Carl used to climb and spend hours upon hours sitting on its roof. Of course I have zero recollection of Carl ever sitting on this gazebo’s roof. The only roof I remember Carl spending any time on was the roof of that house he was eating giant cans of pudding on way back in Season 4. So once again we get an emotional moment from Michonne about something with Carl that the show has not shown us just like her and Carl talking about how they are besties. It made the scenes of Michonne and Rick fighting zombies while trying to put out the gazebo fire just look ridiculous because that damn gazebo has no emotional value to us as viewers since we didn’t see all this time Carl spent sitting on it.

On the positive side, Danai Gurira continues to deliver in her scenes showing how hurt Michonne is by Carl’s death. Even in the goofy “save the gazebo” scenes she was compelling just because of how Gurira sold Michonne’s pain and need to do something to honor Carl even if it is something idiotic. I have started my countdown clock to when Gurira jumps off of this sinking ship especially after her winning performance in the massively successful BLACK PANTHER movie.