R is for Rick 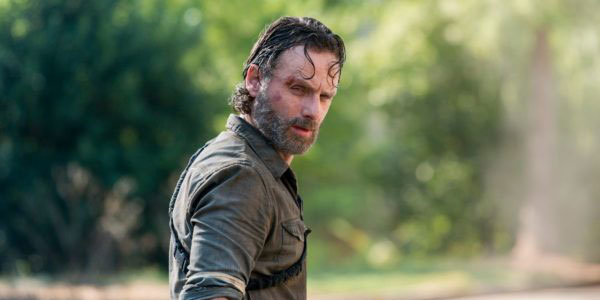 Finally we get to Rick’s segment. The only really interesting thing about this segment is Rick deciding to read Carl’s letter to Negan which spurs Rick to reach out to Negan on his walkie-talkie and let Negan know that Carl is dead. On the positive side this was some of the best acting that Jeffery Dean Morgan has done on this show and I really bought his shock and sadness upon hearing the news of Carl’s death. The Carl/ Negan dynamic was so interesting in the little bit of screen time it was given on the show and if you are a fan of the comic book then you are aware of just how much more there would have been to come between Carl and Negan if Carl had lived. That bummed me out while watching because once again these scenes pointed out just what a waste it was to kill Carl because it doesn’t really spur any storyline. All of what is going on now could still be happening with a live Carl but by killing Carl there is so much potential story that just goes unfulfilled.

Back to the tense conversation between Rick and Negan. While Negan is showing some grief inspired cracks in his badass persona and making some really salient points about how a lot of the bad shit that has gone down in this seemingly never ending war is Rick’s fault, it was ridiculous for him to try and blame Carl’s death on Rick. It was Negan who ordered his crew to firebomb Alexandria when he knew that Carl was in there so acting like his actions couldn’t have just as easily been the cause of Carl’s death was super hypocritical.

And Rick was completely ignoring his son’s dying request with reckless abandon. Not that I blame Rick for being singlemindedly focused on killing Negan. I hated Negan in the comics and somehow the TV show was able to make me hate the character even more despite having one of my favorite actors in the role. So I am hoping against hope that the show decides to swerve left and ignore the comics at the end of this war storyline because Negan really needs to die.